From an interview with Mario Maccarone that has been edited.

There are two Mario’s here.

We had both been working at top end restaurants and my business partner set up a little catering business from home. I would help him with those jobs. We’d get one here and there, then one become two. Eventually, over a two-year period, we became incredibly busy operating out of a domestic kitchen.

We were looking for somewhere to cater from, and I had been working part-time up the road at the Blackcat Fitzroy. We were very aware that – in this neck of the woods at that particular time – it was very low rent. Most of the shops were bordered up with curtains strewn across the front.

Students were living in them.

This was a very arts-based community and they needed to eat. We felt that we could lift the standard of what was available, and still keep it inexpensive and competitive. So that was really our M.O from the outset.

We still get kids in here who come for a bowl of soup and a basket of bread. I had a chap who spent $100 on his own the other day. I was like, “how do you do that?” But he had a drink, an entrée, a dessert, a main course, a coffee, a wine, a liqueur. On the other end of the scale, someone might spend $20 on a spaghetti bolognese and a glass of wine.

You can be in and out in 20 minutes, or longer.

It’s multifaceted in that way. 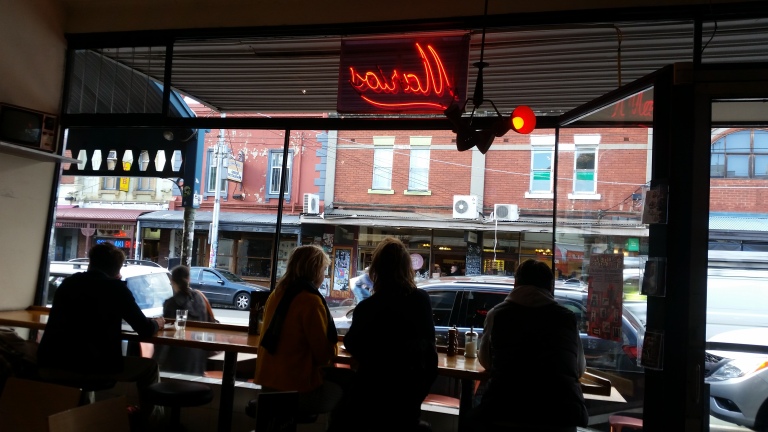 Back in those days, we couldn’t get a liquor license.

Most food places had a B.Y.O permit, which cost about $45. But we did something quite radical and didn’t let people bring booze in. We said, “no, let’s not have anybody drinking.” What happened is that people would come, they’d eat and they’d leave. We just refused to get the permit.

It was one of the great decisions we made because, as we started getting press, the then State Government and the broader community started saying, “what crazy world are we living in? A restaurant can’t get a license to serve a glass of wine.”

It was because the pubs and hotels had a stranglehold over the permits. Carlton United Brewery owned a lot of the pubs, and they didn’t want licenses to become available willy-nilly. There was a desperate need for reform.

The laws legally changed in ’89, and we got our license in January 1990. We originally had a few wines, beers and basic spirits. A glass of wine would cost $2.50. But as time went on, people would ask for a lighter red and so forth.

Eventually, we decided to expand into a list that broadly covers people’s tastes.

The café culture was about people wanting to go out.

People were limited to fancy restaurants or pubs which were traditionally male dominated places. So, when we opened, the first thing that became obvious was that we had lots of girls coming in on their own. And single dining was very uncommon. Now, lots of people come and sit at the window.

So there’s a whole list of things that conspired to make our formula the way it is. We wanted to give people an alternative. Especially around here, kids didn’t want to go to a pub where the football was on. We had a place that didn’t play commercial music. Anything a pub was doing, we weren’t doing.

Now there’s thousands of cafes doing this, but it wasn’t so obvious in 1986. 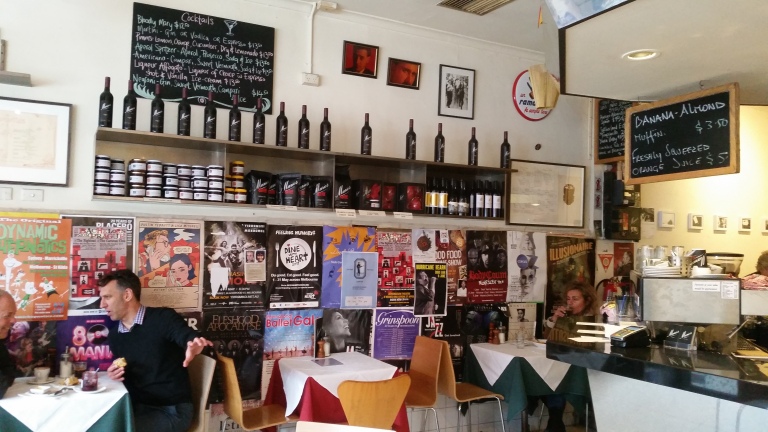 We weren’t too caught up in trying to be fashionable with the food.

We always had a balance. Half the food is traditional and accessible. Those recipes have remained the same for thirty-one years. People love them. Then the other half of the menu changes every eight weeks. That allows us to stay relevant without having to reinvent the wheel every five minutes.

I’ve been sitting here for 31 years and I can’t think of too many places that are a) still running and, b) with the original owners. People love the fact that we seem unchanged. The truth is we are changing all the time but the change is considered and minimal. To some end, I think that helps us stay relevant. 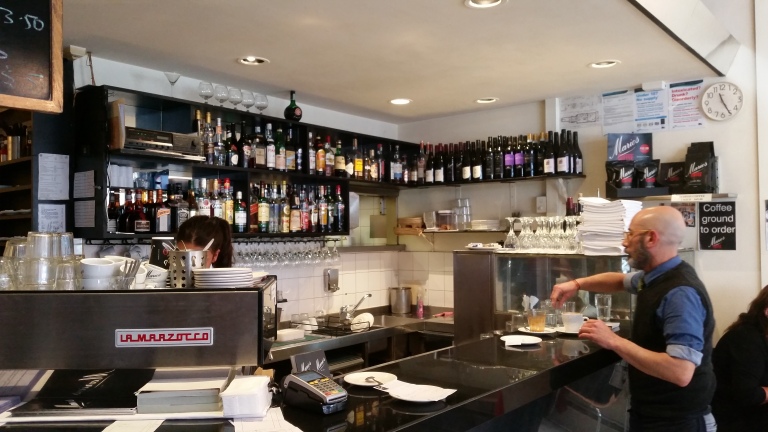 I recall in the 80’s we used to bake our own focaccia bread and, really, no one was doing focaccia at that time. We’d bake it every day and fill it with salt, rosemary and maybe prosciutto. But it got to a point within five years or so that every place in Melbourne was doing focaccia.

It had become part of the consciousness of Melbourne dining. We took the decision to stop doing focaccias because it had been done to death. Now, it is tragically dated. You still see focaccia here and there but – in a way – if you have it on your menu, you tend to think “oh, these people are still doing that.”

It’s not criticising the actual thing. Focaccias are still great. But it symbolises a sense of awareness for what is fashionable, and how some things – in food particularly – come and go.

And in the old days, the media had a different role.

Now it is constantly focusing on the newest places. They are often unproven, and they are often unready to deal with crowds. When we opened here, it was nearly 18 months before the media said anything about us.

It gave us a lot of time to get stuff right.  Once you get some publicity; you get people from all over town coming. And, if you aren’t ready, it can be the worst thing that’ll happen to you. I can think of many places where – over the first few months – they were hugely successful. Then, within a year, they closed down.

I recall working in a restaurant in the city in my early 20s. A reviewer came in, ate the food and – a few days later – rang the restaurant and said, “I didn’t really enjoy the experience. I’m choosing not to write about you. I’ll come back in six months and give you another go.”

Now it’s kind of the opposite. There’s this over-saturation of information. Often you’ve got people who don’t necessarily know what they’re talking about. The person reading it has to decipher the expertise of the reviewer.

And as soon as you read it in print it has to be true. 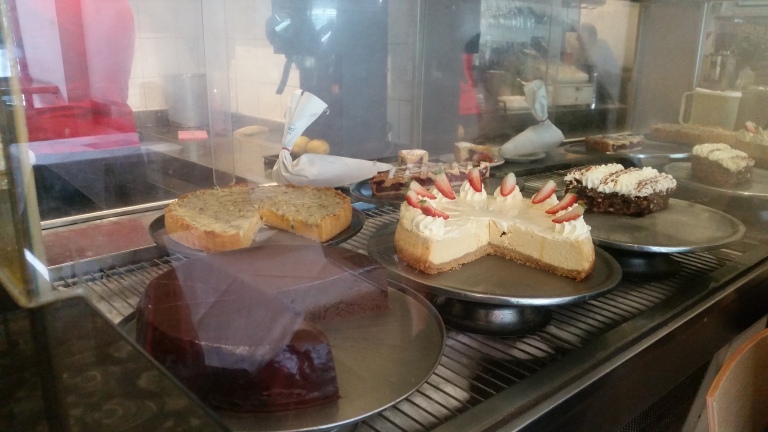 The first art show we did in here was for a guy called Graham Barker.

I think it was in 1988. We hung his work up, and after a few weeks we’d talk to someone else and put their work up. Now, we’ve been doing this for almost thirty years. We hang a show every third Monday night. 100% of the sales go to the artist. The only cost is that they pay for the hanger.

It was born out of the fact that a lot of these shops were artist studios or band rehearsal spaces. There were always actors, writers, musicians; all sorts of people around. It seemed like a nice thing to do, and it adds to what Marios is. We like to see ourselves as a mini little cultural hub.

But, we’re not saying you have to be an artist to walk through the door. Everyone is welcome. A big part of our earlier success was that we were very welcoming of minority groups.  I think you’ll find a lot of people who remember the places where they weren’t that welcome.

We were a place where people could come and not be judged.

Before there were trams, the main street of Fitzroy was Napier St.

Years ago, there were pubs on every corner. That was the culture for 100 years. When trams came into play, they chose to put them on Brunswick St rather than Napier St because they thought it would ruin the street. It became apparent later that people were using the trams, so those streets became the popular ones.

When we started here, the corner building was the post office. There were 3-4 butchers on the street. 3-4 vegetable suppliers. There was a stationary shop. A hardware shop. A couple of mechanics. A haberdashery. Every bank was here. It had all of the things you needed in life.

Now there are no banks in the street. No petrol station. No mechanics. It’s turned into cafes, bars and retail.

Unlike Smith St which still has a bit of that going on, but every day it’s turning into non-essential stuff. 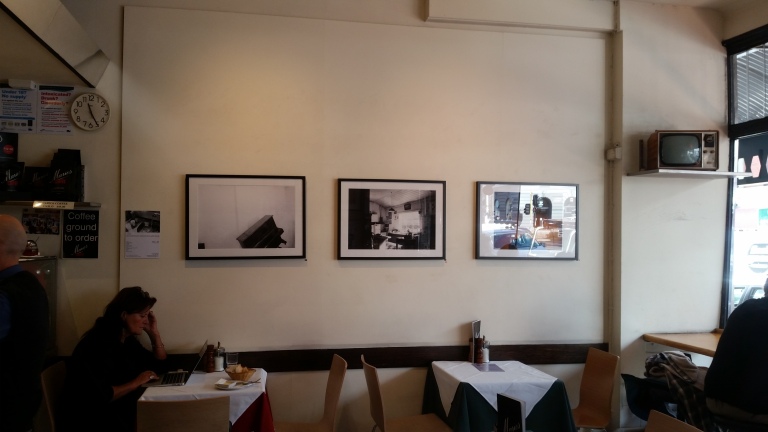 I still hold a bit of nostalgia for the way the street used to be.

I’m pragmatic and a realistic, but what people want today is to drive into an underground car park, take an elevator to the supermarket and get everything they need under one roof. With strip shopping you were exposed to the elements. So I understand why strip shopping has – in some ways – faded.

But I still think strip shopping has legs. As more people go to Chadstone and their local shopping mall these places become less valuable. If you were twenty-something and you had a great idea for a shop, the last place you’d start is Chadstone. The rent is outrageously expensive and they wouldn’t take you on because you are unproven.

That encourages youngsters to try something new. If there are empty shops in the street, and lots of them, all of a sudden there isn’t a demand. Rent goes down. They become reasonably priced and, if you have an idea and you can work all day and night, strip shopping becomes a brilliant opportunity. 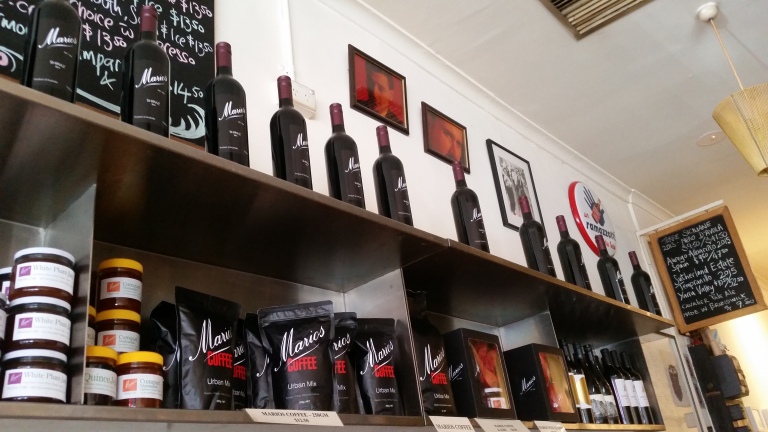 We came here because there was a crowd that needed food, and the rent was cheap.

Most people around town wouldn’t go to Fitzroy. It was the slum of Melbourne. There was a lot of violence so some people were fearful of the area.

The truth is, it was – and is – a fantastic and a very supportive community. People needed to support each other because they weren’t getting a lot of support from anyone else.

And, geographically, Fitzroy is very pleasing to the eye. It’s also the smallest suburb in Australia. It goes from Nicholson to Smith. It’s one Melbourne’s first suburbs, and it had the most pubs – per square metre – in Australia.

There’s a lot of interesting history about Fitzroy but, inevitably, things are constantly changing and evolving.

Mario and I are both conscious of the fact that good business decisions are based on good social decisions.

They go hand in hand. But I think a lot of places get caught up in profit and losses. Often you go in and you feel like it’s a bit soulless. Like they’re working on the lowest common denominator.

I often say to people that I could’ve been more ruthless and made more money. But I’d much rather have the place I want to have, and for people to be paid properly.

It has worked for us. 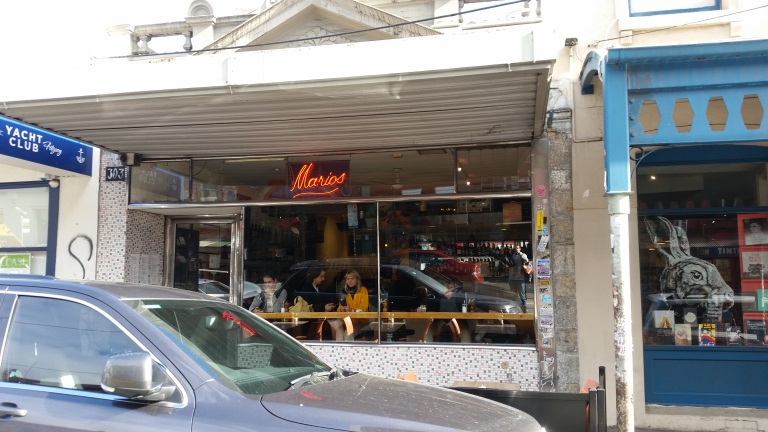 Legends in their own (non-skinny) caffe lattes (The Financial Review, Raymond Gill)