From an interview with Penny Syber (f. Kaos, Killi & Lee-lu) that has been edited.
227 Glenferrie Rd, Malvern VIC 3144

After I decided that I didn’t want to be a nurse anymore my husband and I opened this bookshop.

Starting out wasn’t a particularly difficult process. David – who had a bookshop on Carlisle St – was making the bookcases and had the core of the stock in storage. He bought the books from scratch and had been collecting for a very long time.

We found that advertising for our particular business doesn’t help. Word of mouth and people stumbling across us is how we sell books. Having a web presence also makes a difference.

We also have a lot of returning customers.

This is a lifestyle not a job.

There is a difference. Some people – if they’re really lucky – get paid for what they love to do. Most people aren’t in this situation. They have a job which they work at and come home and say, “thank god that’s finished.”

In owning a small business you have to like what you are doing because it takes up a very large amount of time. Other work isn’t like that. By and large, you do your eight hours and you come home and then your life is yours.

The easiest part for us is being open to the public, because there’s a lot of work being done behind the scenes. This includes keeping the books in order, processing the books, putting the books away, sourcing books, looking at potential stock and I do a lot of posting.

That in itself is a lot of work. 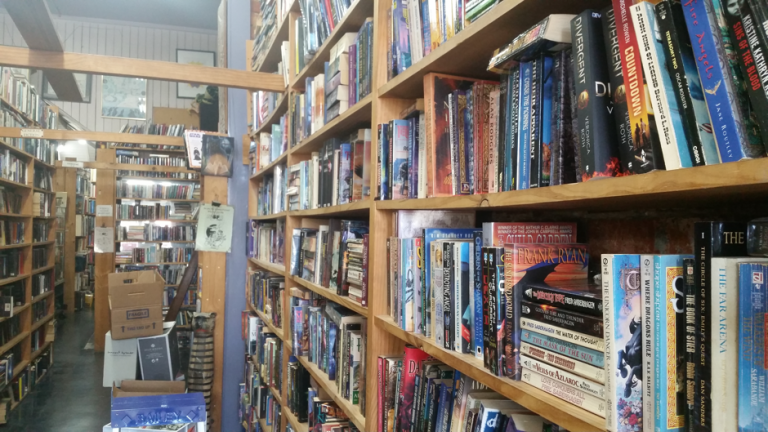 When eBooks first came out there was certainly a drop in people coming through.

Now, David and I have come to the conclusion that – however many people take up eBooks – that’s how many people put them down. There’s a tactility to reading a book that you can’t get by reading a computer.

They have their place. They are a tool, like a book is a tool I suppose. They are portable reading machines that – if you do a lot of travelling or use public transport a lot – they’re useful.

Books are expensive. If you go into the free section of the eBook downloads, you can read a lot of books for very little.

But people who have eBooks often don’t realise that they don’t own the books. They are just hiring them from the supplier. If the supplier decides they don’t want to support that book anymore, it will be wiped from your device the next time you log in.

For example, one of the companies digitised Nineteen Eighty-Four but they didn’t have permission from the copyright owners. They had to withdraw the digitisation of the book and – the next time the eBook owner logged in – it was taken off their device.

But, we’ve been here 24 years so we’re not going anywhere soon.

A lot has changed.

For the better? I doubt it, because – on this end of Chapel St. – they’ve killed the diversity.

When I first came here, there were three banks, two greengrocers, two butchers, a supermarket and two sewing machine places. Now, apart from cafes, eating places and hairdressers, there’s very little. That doesn’t encourage people to come down and have a look.

It’s just a lot of shops that look the same.

It’s the rent thing. If you go over High St. the rent is almost double, and if you go over Commercial Rd. you can double that again. If you’re a small business, it’s attractive to come down to this end of Chapel St.

They’ve really made it homogenous.

David and I get the feeling that a lot of these cafes are borderline going out of business. The rent is going up and there’s just too many of them.

If you’re a daytime business, anything that stops the foot traffic is not a good thing.

People are surprised that there are places other than cafes.

You think about – from Paint Spot to Mcilwrick St – There’s a hamburger place. A picture framer which is about to become another café. There’s me. There’s a café on the other side. A shop which has been empty for almost 20 years. Olga the hairdresser, Lady Nelson’s Wine + Kitchen and the last three shops are food places.

There’s an inundation of food places and people get very blind. Luckily Paint Spot isn’t going anywhere fast because people want to get paint. It draws people to this end of the street. They almost trip over me.

I have more and more situations like that because people associate the Windsor end of Chapel St. with cafes and bars. So, the homogenisation isn’t a good thing. It’s not good for them either because – I don’t know about you – but I eat at one or two places.

Unless you have something to sustain the businesses, when the trendoids – for want of a better word – leave, you’re pushing the proverbial uphill to make your living.

What happens if this bubble that we’re living in goes belly up? The first thing people will do is stop drinking coffee and drink Nescafe at home. You start economising and – hell yes – it will start happening more and more in the future.

I won’t say my business is depression proof but I’ve been here for 24 years and – all things being equal – I’ll be here for a few more years.

I used to have people come and buy 10-20 books. That was a common occurrence. Those same people are still coming back, but they’ll now buy 2-3 books. Five at most. And my prices haven’t gone up by that much over the years.

I attribute it more to a drop in discretionary spending than a passion for reading. Books are very expensive. Australians read a lot but, when paperback went to $20 each, it certainly put a crimp in book buying.

It begins to add up, and customers became very discerning about what they buy.

They don’t do that so much now. 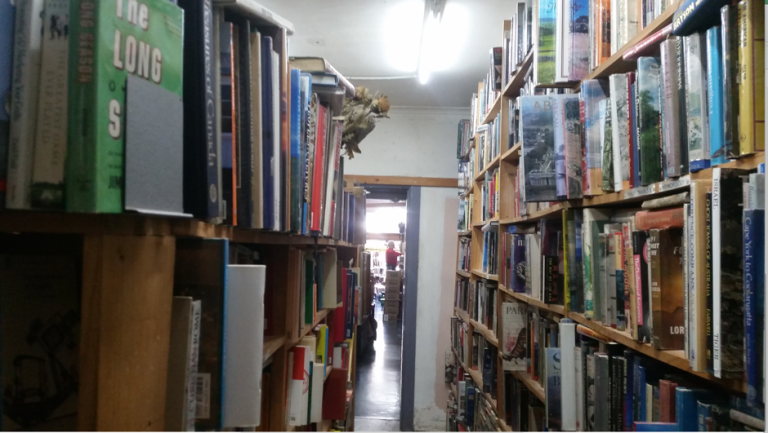 It’s much harder to open a second hand bookshop now.

In the inner suburbs, the rent is going to kill you. Being here 24 years has its advantages but, if we opened now, David and I couldn’t think of looking at this shop.

You could maybe open one in the outer, outer suburbs. Even places like Footscray, they have become gentrified which makes the rent more expensive.  You have to find a niche in a place where you can find cheap rent.

When we started, there was about 50 bookshops in Melbourne. Now there are about twenty.

It’s because of old age. Choosing what is interesting is like asking “how long is a piece of string?”

Who the hell knows.

If David and I could find a word for “weird shit,” that’s what we specialise in.  We look at the book and say “is that going to sell?”

To use an Abbottism, we make a captains call on what gets on the table. It’s often based on gut feeling. Sometimes there are books where you think, “I’m going to die looking at this” and it flies out the window.  And the book you think will sell in a minute is there twenty years later.

Take old hardbacks. Some are good, and some of them end up on my dollar trolley because no one wants to buy ‘The sermons of the pastor or the rector of outer greater metropolitan whatever.’

It’s part of knowing your business.

I’m not going to impose my reading interests on the general clientele.

We have customers from birth to death.

I have people coming in buying “how to learn” for their nieces, children and grandchildren, and I have adults buying back memories of their childhood.

I also have people in their twilight years coming in and buying modern literature.

Ask me on any one day and I’ll give you a different answer.

People are probably more particular about what they read but – 95 percent of the time – we have something in the average reader’s interest.