From an interview with Ian that has been edited.

This is a fourth generation shop.

My great grandparents came from Cornwall.

They were tin miners who decided that it was too miserable a life so – during the 1850’s – they headed down to Sale looking for gold. They didn’t find any so they opened up a menswear shop in Raymond St.

From there, they got bigger and moved to Melbourne in the 1920’s. My grandfather had a big department shop in Bourke St and we had a few shops around Carlton. Then the depression hit which closed him down. He always said that he would be able to trade himself out but he went to work one day and the doors were locked.

So he moved to Glenhuntly Road in 1938, across the road from where Wong’s Cafe is.

There were four originals on this street. Wong’s, us, Blight Shoe Repairs and Dalgarno’s.

We’ve always been a mens and boys-wear shop but we have cut out school-wear.

So now we are just a menswear shop.

This time of year we sell thick corduroys, jackets, sports-coats, suits, a big array of Levi jeans, shirts & underwear. Things like that. We also sell a lot of the New Zealand possum jumpers.

We have a lot of regular customers who live in the area and know what we’ve got. They come back and back and back.

Unfortunately, they’re getting older and they disappear.

A lot has changed in the area.

We used to open on Friday nights until 9pm and on Saturday mornings we closed at 12pm.

Now the big departments are open until 9pm most nights and all day on the weekend. That’s affected Elsternwick because most of the shops don’t open on Sundays.

So customers go to places like Chadstone and Southland.

We’re also going to face a big problem in six months’ time when Coles up the road shuts down.

When they do reopen everyone will park underground, come up through the lift and we probably won’t see them.

This shop hasn’t changed much over the years.

And I’ve seen all the changes to men’s fashion.

I remember in the 70’s men wore the high trousers that would flare out. It was a wild sort of look but they’ve never really come back in. The flared shirts have sort of come back but not the trousers.

It’s a bit strange because normally – in men’s fashion – there are five to ten year cycles. For example, the tie manufacturers will say, ‘you’ve got narrow ties so we want to sell you wide ties.’

They’ll give Peter Hitchener the ties to wear and gradually the fashion will change.

The cash railway were used until about the 1970’s.

The salesperson would send the money and the docket to the person sitting in the office.

In those days there were no plastic bags so everything would be wrapped up with string and rolls of paper. By the time they had finished the change would come back.

It was a more environmentally friendly system but once the cash register became popular everyone got rid of them. Out of laziness we never pulled ours down and – if you keep something long enough – it becomes an antique.

But in the fifties and sixties people would come in and say, “why do you still have this shit hanging.”

And customers didn’t help themselves back then.

And back in the 70’s there was a full time staff of six. During the Christmas period, we’d have six extras.

It was a different world.

All of the signs here are original

Some have probably been around for too long but the best one is a ‘man looks better with a hat.’

And – with people more concerned about skin cancer – hats are starting to come back in. Young blokes wear it to Spring Racing and think that it’s cool.

But the only way that we can compete with the department shops is giving customers good service. We don’t get the volume that we used to but we make sure that customers come back.

That’s all we can do. 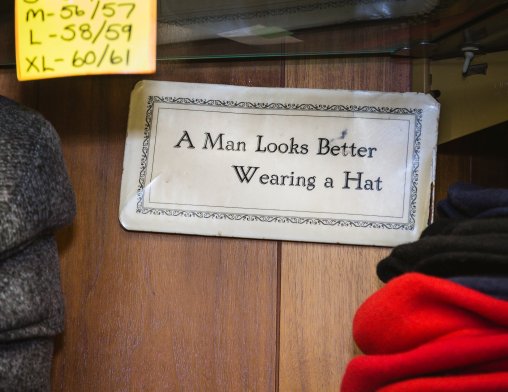 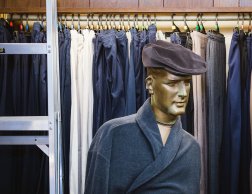 I could get them all on iTunes but I still like to go in to the local shops and read the covers.

Buying on the internet can be a risky business.

You can go in and speak to people.

You can actually feel the fabric.

I remember my grandfather was passionate about men’s fashion.

My father was passionate about it, and I am too.

It’s been a good ride.