From an interview with Rozenn and Abdulazize that has been edited

[Abdulazize] I was a refugee in Kenya and – when I was a kid – I used to watch people make things with small beads.

I learned all about the beads and how to make different types of jewellery.

I eventually moved to Australia and went to the NEIS program straight away. Centrelink sent me there as I wanted to open a small business. I showed them what I was doing and asked them to support me.

So I went to work for the meat industry. I made some money, bought a house and went back to the NEIS program. After passing the test, I made things for small markets and festivals all around Australia.

Customers kept asking me where they could find my jewellery, so I opened this shop.

We go to the markets in Ethiopia and find beads there.

I make a lot of the jewellery in my workshop using glass beads from Ethiopia, silver beads, amber beads, coral beads and a range of others.

When you come here you will see a lot of Ethiopians. They miss a lot of things about home, so I started importing some crafts.

There are 84 tribes in Ethiopia, and each has their own things; chopping boards, head rests, plates, chairs (etc).

So when they come here they feel like they are in Ethiopia.

Everyone who came here asked me where they should eat.

I am good with food, and was constantly asked, “when are you going to open your own restaurant?”

So I opened Konjo cafe about six years ago. Then I travelled to Ethiopia to learn how to make the best Ful and silts breakfast – broadbeans and scrambled eggs with pepper and Ethiopian spice.

I noticed that people would come in wanting to eat a bit of lamb, beef and other small things, so we started a $15 lunch buffet. It’s so one person can have a range of things. Today, we have beef with Ethiopian spice, mild lamb with potato and carrots, chicken, pumpkin, lentils, cabbage and beetroot.

Injera is a staple that comes with pretty much every meal. The Gurage tribe – my tribe – their speciality dish is Kitfo. It is raw topside meat that is chopped, lathered with spices and hot chilli and mixed with clarified butter.

That is my signature dish.

There are a lot of Ethiopian restaurants that change the food a bit.

For example, they make it so it’s not too hot for westerners.

I want to serve food exactly like they do in Ethiopia. Some people think that everything will be really spicy, but it’s not the case. A lot of the spices we use are hot, but it won’t burn in your mouth.

Import regulations have made it difficult to bring in some of the spices, but we still go back to Ethiopia and bring them here. Without berbere you would lose the authentic taste.

It really is the base of the food.

You know that the first coffee was found in Kaffa, Ethiopia.

The story I know is that a shepherd was looking after their sheep, and noticed that they were never sleeping. They were always jumping around and running. So the shepherd watched them and saw what they were chewing.

The shepherd discovered bushes with red berries, picked them, took them home and started chewing them in the evening. In the middle, there was a pit. The shepherd pulled the pits together and – at the end of the night – threw the pits into the fire.

There was a huge aroma in the fireplace, and that’s how they discovered the roasted beans. This was in the seventh century. From there, coffee was exported to lots of other continents.

If you go to any Ethiopian house – even if they are not in Ethiopia anymore – they will often invite you in for coffee, roast the beans and show you the aroma.

So a lot of people come here for our coffee.

For the traditional coffee, we roast the beans, brown them and let it brew slowly. We start with cold water and – when it hits boiling point – it is ready.

Then you let it sit, and – because of the tilted shape of the pot – all the brown falls and stays at the bottom. We normally put ginger in the coffee, and we put cardamom, cloves and cinnamon in the tea. Most people have coffee with sugar but the Gurage people usually include a little bit of salt and spiced ghee.

We did the food and wine festival a few years ago, and our coffee was voted number one. For the traditional coffee we import the beans from Jima – a rainforest in Ethiopia – and for the coffee machine the beans are roasted locally

It is a different process.

It is difficult to run two businesses simultaneously.

I have six brothers, two sisters and we were a poor family. We have always worked hard to survive. I went with my younger brother to Kenya as a refuge, and we had a lot of hardship there.

So you asked me how I do it?

Jewellery is my passion and I’m a good cook. A lot of people will come for the beads, find out about the restaurant and eat there.

And we’ve been in Footscray for the last 20 years. This was where my first house was, and I love the area.

All of my family lives in Australia now. 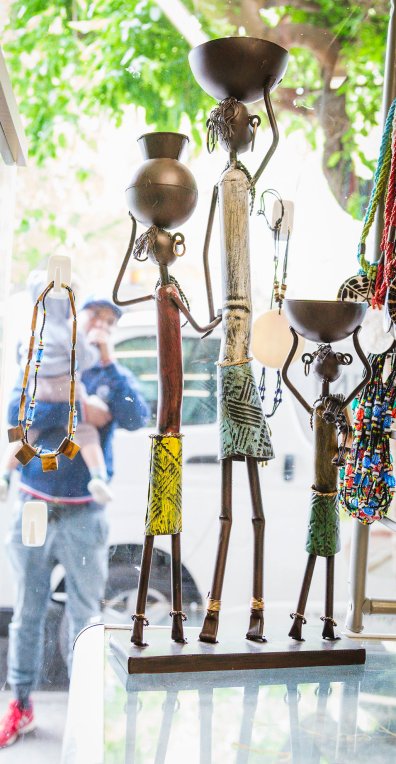 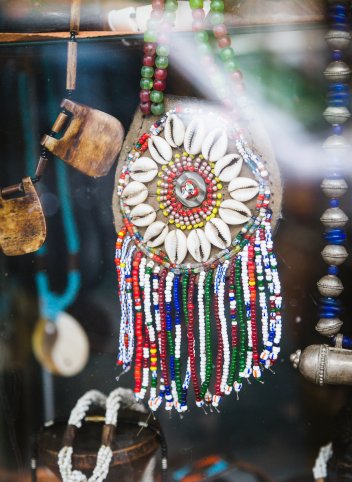 (Rozenn) There are no Ethiopian desserts.

But, we sometimes have chocolate fondant cake and pastries such as croissants.

We will reintroduce them once summer starts. I have brought the French influence, which is a distinguishing point that you wouldn’t find in other Ethiopian restaurants.

We are often working here all day – breakfast to early dinner – and there are people coming in all day. When we first started, it was mainly Ethiopian Australians but now it’s basically 50/50.

I think Ethiopian food became more popular in Australia and, not long after we opened, we received a bit of publicity and people started knowing about us.

Probably close to twenty, and four in this little strip.

The competition is healthy as it keeps everyone on their toes.

The menus are pretty similar because everything is traditional, but each restaurant has their own speciality.

We’ve seen the area change so much.

Everywhere you look high-rises are going up.

A lot of younger people who used to live east of Melbourne are moving here as it’s more affordable, but the houses are becoming more expensive. Some of the changes are really good as Footscray was – at one point – run down and quite unsafe.

But, it’s also losing a bit of its soul. There is a real mix of cultures here, and we don’t want to push away any of the migrants.

We want it to change, but we don’t want to change it too much.

(Rozenn) Now we have three kids and two businesses.

I’d like more time with the kids, as they are growing and need me. If they have homework, I want to sit down with them.

But my kids grew up here.

My youngest knows all about the coffee and loves to cook.

The customers have seen them grow.

Written by Aron Lewin, video by Stephanie Chen and all photos by Tatiana C C Scott.