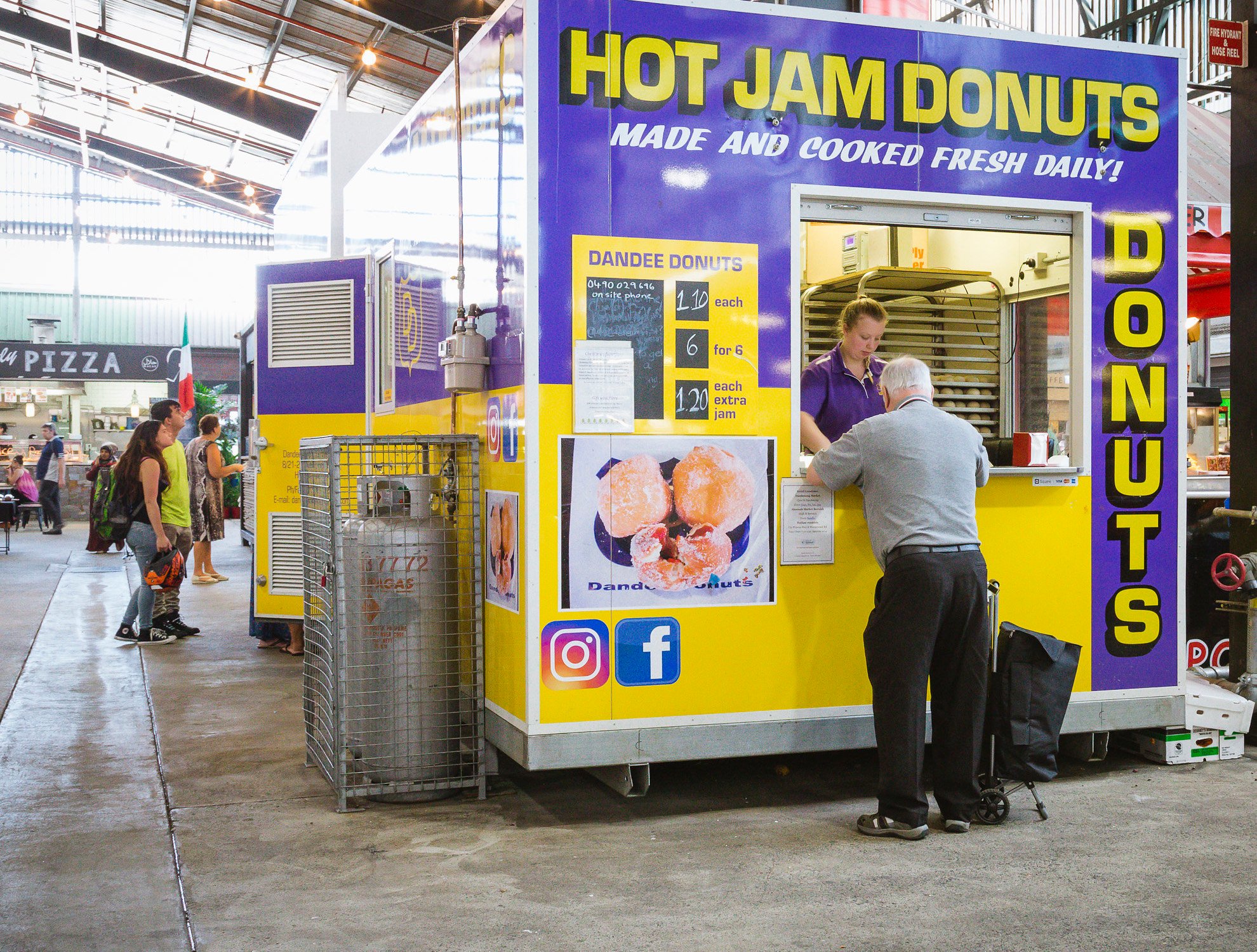 From an interview with Susan that has been edited

My parents started Dandee Donuts around 1968.

Mum’s parents had a donut business, and my parents used to work for them before they decided to go out on their own.

Originally we operated out of the backyard of our house in Oakleigh but – once they got the site at the Dandenong Market around 1974 – I’m assuming they decided to build the factory in Dandenong.

Dad was originally in the building industry and used to build all of the donut trucks, and mum was very good at the accountancy side of the business.

So it worked well.

The American Doughnut Kitchen at the Queen Vic Market and us.

My grandfather worked at the Queen Vic Market in the 1950’s, so it all came from there.

American Doughnut’s recipe is different from ours which interests me because our recipe originated from theirs.

We took out a colouring agent but – other than that – our recipe hasn’t changed in 50 years.

Unofficially I used to help dad in the backyard when I was really little.

This was in the early 1970’s and – during school – I’d work in the trucks on the weekend. I saved heaps of money that way and bought my first car with that job.

I then went to university, studied pharmacy and didn’t want anything to do with the business. Mum passed away in 1993, and dad also lost interest. It was run down and – once we lost our site at the Queen Vic Market – the business tottered along without doing too much.

Dad got sick at the end of the 90s, so I started doing the bookwork. I was overseas for four years, and the business sort of ran itself. But, once I came back, I was trying to have children and decided that looking after the business was a good way to spend time with the kids.

My kids are 8 and 10 now and – when they come here – the first thing they want to do is go up to the front, sit at the till and do the money. They’re both really good at maths which impresses the customers.

It’s where I learned all of mine.

Making the donuts is a three or four hour process depending on the quantity that we’re making.

All of the ingredients – flour, sugar, yeast, salt & fat –go into the bowl. The water has to go in at a particular temperature to activate the yeast. It has to sit and prove for a couple of hours, then the dough gets punched down and proves up again, before it goes into the machine to get cut and rolled.

They will go off and try other donuts – and they might have a fancy donut every now and again – but they are about $6 each. They are not going to eat too many of those.

And we have customers who have been coming for forty years. They remember coming with their grandparents.

We’re going to celebrate our fiftieth year next year, so I’d like to celebrate the anniversary by displaying a history board along the side of the kiosk.

But I have no interest in eating our donuts anymore. I used to eat plenty as a kid, but I just can’t.

I’ve just spent too much of my life around them.

We’ve done custard and Nutella donuts in the past, but it takes an extra staff member and it’s quite expensive to do.

It’s not something we’re looking at doing long-term.

And most of our customers just say, “nup.”

They get a bit nervous when we change anything.

There’s donut shops everywhere at the moment, and I think the fad will wane after a while.

There’s a large number of regulars, but we get new customers in all the time.

I don’t know how my parents originally promoted the business when it was at the back of their house in Oakleigh.

It was easier to get sites in those days. We used to do the MCG, all the VFL grounds – Victoria Park, Princes Park, Arden St etc – the Moomba festival where we had ten trucks working simultaneously. There were less food trucks then, so it was easier to get those sorts of jobs.

My parents also ventured into catering at one stage. Dad would do spit roasts and things like that, and at various times we had hamburger and hot dog stands, which I called Dandee Dogs.

They tried all these things, but nothing was as simple or as profitable as donuts.

In the last 15 years or so it’s become very multicultural.

There’s a multitude of nationalities here which is reflected in the market.

In the old days it was just fruit, vegetables and clothing but now there’s all sorts of food from all around the world.

I think regulars trust the product.

We have been here for a long time, the recipe hasn’t changed and customers know the donuts are good.

We have our hiccups every now and again because it’s a fresh product.

Occasionally something might go wrong but, whatever happens, we do our best to get the word out.

A lot of the other places won’t bother turning up if it’s raining or there’s a mishap, but we’ll always be there.

Written by Aron Lewin, all photos and videos by Tatiana C C Scott

Scattered Around The World

Discover Your Own Backyard

There was an error retrieving images from Instagram. An attempt will be remade in a few minutes.