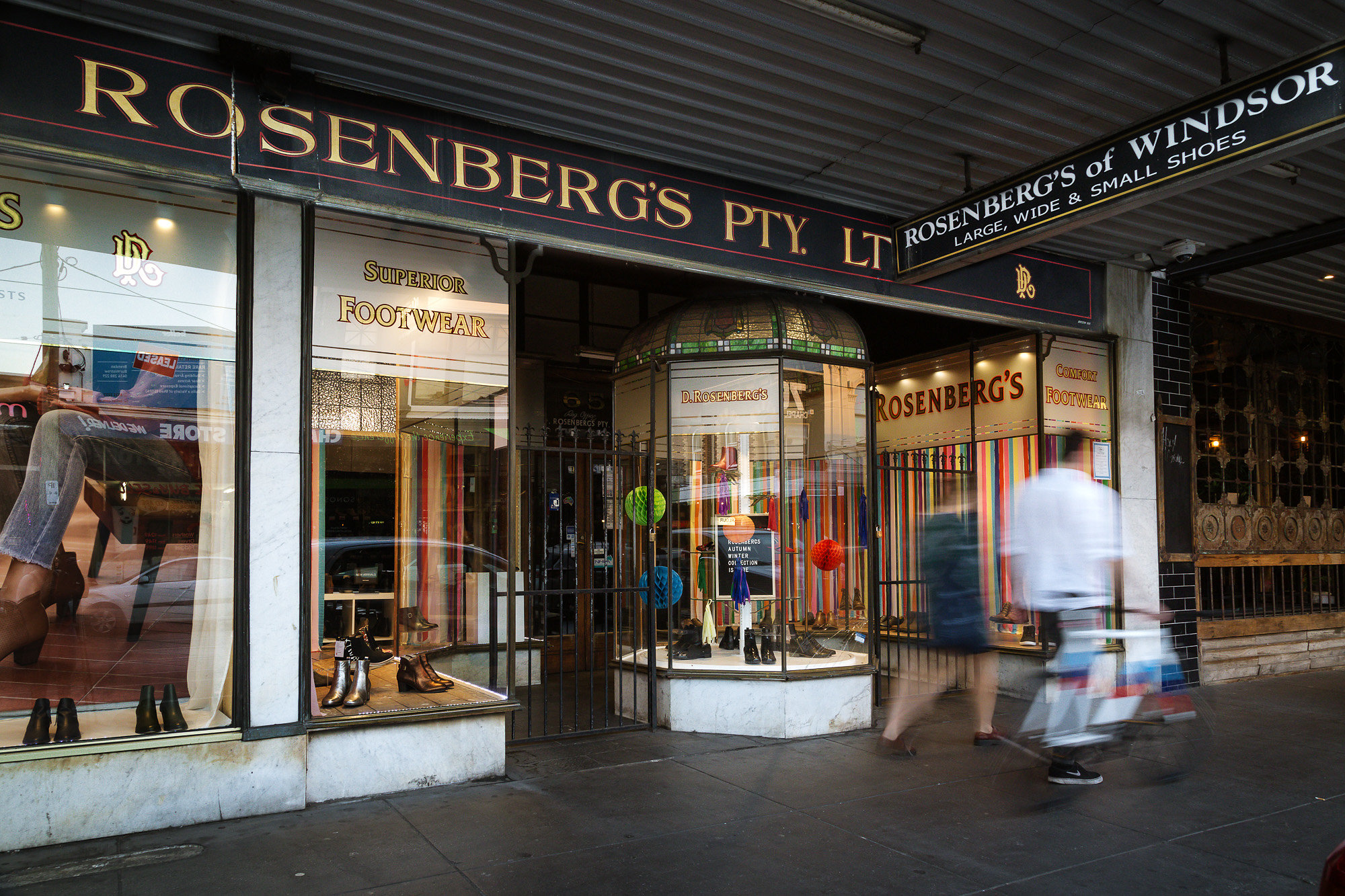 From an interview with David, Stuart and Meaghan that has been edited

We are a fourth generation shop.

(David) My grandfather – also named David – came over from Russia via South Africa.

He was heading for New Zealand before he met Matilda Rosenberg while ashore and jumped ship. He decided to stay in Australia to court my grandmother, and he had some capital in his pocket to open a store.

David was tossing up between Swanston St and Chapel St but – if you have a look at pictures of Chapel St in the early 1900s – it was really crowded. He decided that Chapel St had more of a passing trade, so he decided to come here.

A story that has been passed down is that Squizzy Taylor robbed the store in the 1930s. He was a renowned crook in the area and had a lot of musclemen. The stock was allegedly sold in the pubs up and down the road but everybody, including the police, was too scared to take him on.

He never got his stock back as far as I’ve been told.

David ran the store until the Second World War when he passed away, and my father Marcus – who was in the Air Force – came back to take over the shop.

This is an interesting old building, and a hopeless one to work in.

The shopfront has marble on the bottom, with copper and gold-leaf on the ‘D. Rosenberg’s’ lettering. There’s stained glass around the rotunda that can be tricky to work with as it blocks the visual merchandising.

The shop has stairs in all directions, walls have been taken out and nothing lines up with the façade of the building, so something has been altered dramatically in the past. I believe the stained glass was common at one point but – up and down the street – there’s not much of it left.

We also had a stained glass privacy screen past the front of the double doors, which meant that a passer-by couldn’t look at the customer’s legs. It was a beautiful screen, but it became decrepit and fell to bits, so we took it out years ago.

This would have been an opulent shop-front for its time, and it gets a lot of people stopping on the street.

(David) I came into this shop a lot as a youngster, and entered the business when I was about 18.

For me, it was just work. I got married, had kids, needed a job and it was a good job. I liked being with people and I liked the fitting aspect of the business. It was all very interesting to me.

Marcus started doing large sizes, and I took that on. We did large sizes, very small sizes, wide fittings, fitted all the convents, all the nurses, did a hell of a lot of surgical shoes and so on.

You’d travel an hour out to fit someone at a hospital in the outer suburbs, the shoes wouldn’t fit and you’d come back not making a sale. So, in trying to keep the roots of the bricks-and-mortar open, we decided to focus on large & wide fittings as well as small fittings.

But, with growth, we’ve cut out the small fittings.

We used to hand print catalogues using the Gestetner.

We had a very big mail order system, but the advent of the computer changed things. And this was certainly the first shoe shop on the internet, I can guarantee that. It naturally followed on from having a catalogue that was initially hand-drawn by an artist.

You can imagine what it was like when we first started. For customers outside Melbourne, we’d receive an outline of a person’s foot, measure it and write a letter back saying, “we have this, this and this.” Letters and faxes would go back and forth, we’d work out the fittings through the mail and post the shoes out.

We’d spend tens of thousands of dollars on catalogues and – once it was done – you couldn’t change it.

We have lovely customers & wonderful loyalty.

With an average shoe store you might like a pair of shoes, buy it and – the next time you walk down Chapel St – you’ll go to a different shoe store. With our store, people come here and they don’t bother looking at other stores. There are families that we have been looking after for a long time.

We used to have a filing system with 20 cards stapled together; each line with a name, an address and a pair of shoes. We record this information in our system now, and it helps us assess what shoes will fit which person. If someone contacts us on Facebook saying, “will this fit?” We can answer them.

We also work with a lot of bloggers on social media. With greater awareness of plus sized clothing, there’s definitely an interest in catering to our customers, and providing content that is just for them.

It’s why many of our staff have a history with the shop.

We can generally fit people based on our own shoe-size, and customers want to see themselves in the products we sell.

We’ve also been working with the LGBTQI+ community for many years.

It’s a very small market for us – maybe 1 per cent if we’re lucky – but, for a lot of people, it might be the first time they’re wearing a particular type of shoe.

We sell a wide variety of shoes, and it’s really important that customers feel like they can get something they’re after.

People also identify with the history of the shop and what we stand for which is great because – once they’re here – they might shop at Rosenberg Shoes for the rest of their life.

It’s just about ensuring that all of our customers feel comfortable.

One of things that’s changed in a big way is that all of the shoes in the 60’s and 70’s were made in Collingwood and local factories.

(David) I used to spend so much of my week visiting factories and picking up shoes. Now, there’s no guarantee that the shoes you order will fit properly, and it’s hard to send them back to the manufacturer because they are so far away.

Also, manufacturers want to make sizes 6-9 where they can get a turnover of thousands of pairs and there’s no risk of the extremities.

So they see us as a risk.

We’ve tried to support Australian companies, but the manufacturing industry in clothing and footwear has been decimated.

There’s not much you can do about it.

(David) When I was on the Chamber of Commerce we tried to create the Windsor Shopping Village.

It would have had a butcher, a baker, a candle stick maker, 4 banks & a few small shops. Now, Windsor has become an eating area that has totally changed over the last decade.

Down the Jam Factory end there used to be clothing manufacturers. There was a big car yard and my grandfather on my mother’s side ran a junk yard opposite Elizabeth St. Where the big vacant block is, there was a Ford Dealership. Before that, that was a clothing and knitwear factory. It depends on how far you want to go back.

The main part of Chapel St was Prahran, and Windsor was always the dead end. There was a bit of a revival at one point but it died off again. It became very high priced, with bars restaurants and cafes. These shops seem to be doing alright, but the in-between stores are, for the most part, struggling.

I think Windsor will go the way of Lygon St, which is full cafes and bars. It’s not what I wanted to see when I was younger.

I wanted a nice mix, with greengrocers, butchers and delis.

That mix is totally gone.

You  see a lot of businesses dropping out of the market because of international competition.

We also face a lot of competition from manufacturers who are selling directly to the consumers.

So we’re in a very tough market.

But people still want shoes and – for a little, independent shop – we get so busy some days.

It’s because customers know that we’re honest, that we’ve been here for four generations and that we’re not going anywhere.

I don’t know if we’ll be around for another 115 years, but we’ll be here for as long as we can.

Written by Aron Lewin, with all photos taken by Tatiana C C Scott