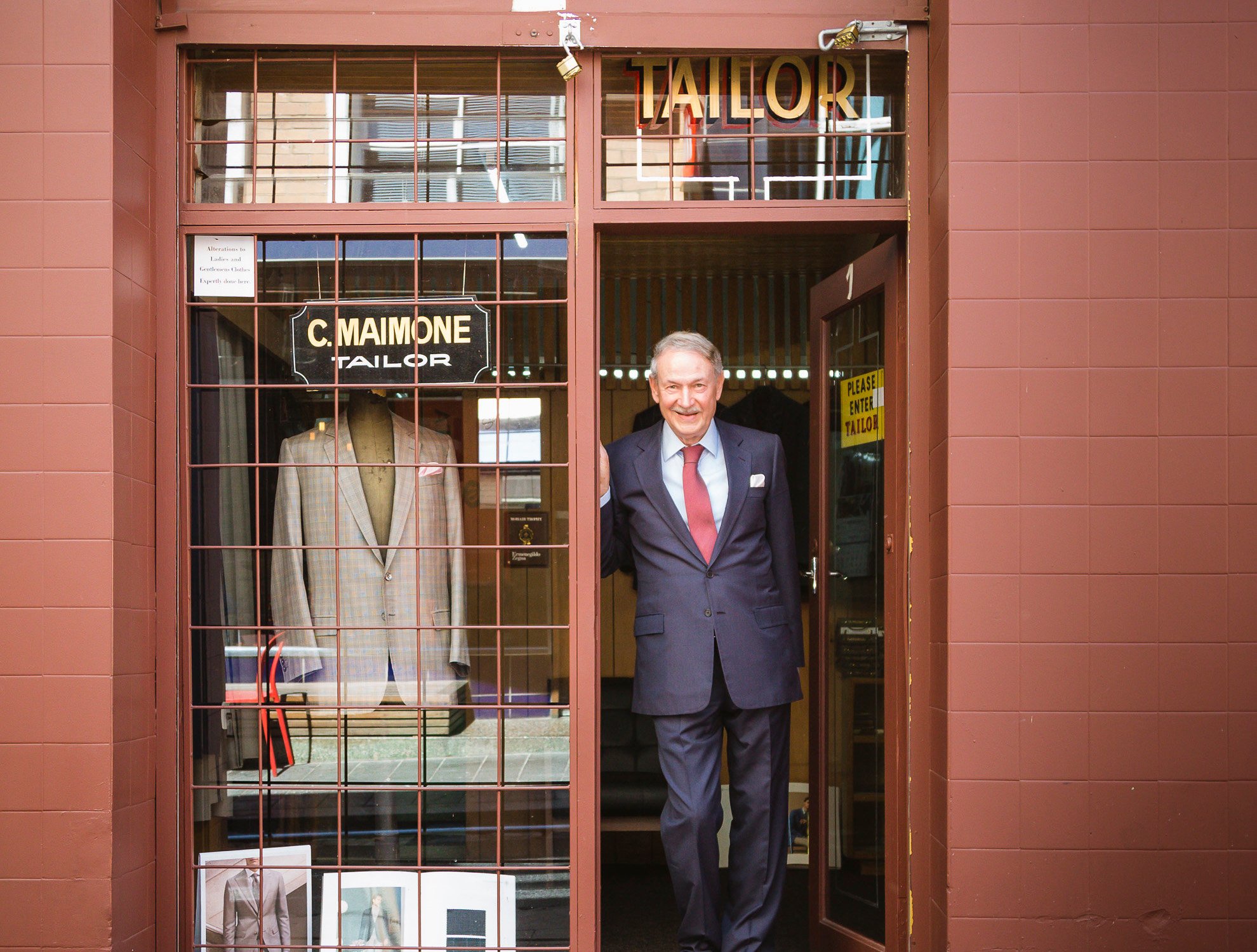 From an interview with Charles that’s been edited

I started as a tailor when I was 14 years old back in Italy.

In the summertime, school would finish and we had nothing to do except go to the beach. Our parents would tell us to do something rather than wasting our time, and my father told me to learn a trade.

First I studied as a shoemaker– preparing shoes, cleaning them and so forth – but the master who was teaching me moved to the northern part of Italy. I was left with no master, and my father said “what are you going to do now?”

My older brother Dominic was working as a tailor so I decided to do the same job as him. I became a tailor and did a seven-year apprenticeship in Messina. Dominic migrated to Australia in 1956, opened up a little shop on the corner of Johnston and Gore St and – in 1961 – he decided Australia was a good country.

He encouraged the rest of the family to move to Australia, and that’s how I ended up here.

For six years I worked in the tailor shop on Johnson St, Fitzroy.

Every month thousands of Italians immigrated to Melbourne, and most of them landed in Fitzroy, Collingwood and Carlton.

They were very traditional in getting their suits made for Easter, Christmas, christenings and marriages. It was very busy for a time, but a lot of Italians moved from Fitzroy to other suburbs.

I thought I might have better luck in the city so, in 1967, I moved to the top of Bourke St, just across the road from Pellegrini’s. I worked in a building that had three shops – Thomas Fish & Chips, a barber shop and a bookshop. The barber shop was at the front and I worked in a couple of rooms at the back.

People would come for a haircut and they would see me stitching through a window.

I was lucky enough to get a lot of good customers from that.

In 1972, somebody bought the building and kicked us out of Bourke St.

There was a tailor who wanted to retire and move back to Italy, so I offered him some money and he gave me the shop.

I’ve been here since then, and I’m now the oldest tenant and quite possibly the oldest worker on this street. In the 51 years that I’ve been here the whole area has changed, with restaurants and cafes popping up everywhere.

But my work hasn’t changed much over the years. My customers want the same quality as when I arrived in Australia, and I still do everything by hand, which doesn’t exist anymore.

Not even in Italy.

High quality machines are used which imitate the hand stitching that we do.

So I think we’re the only tailor in the world that does the lapels, the lining inside the jackets, the whole thing by hand.

I have customers from three generations.

People who came in the late 60’s and the early 70’s are still customers.

We also get new customers, mostly young people who want something special for a wedding or a big event.

We do repairs as well.

A lot of shops – Henry Bucks, David Jones and so on – used to bring alterations by the truck for me to do. But, over the past 10 years, I stopped doing this work.

I only do alterations for customers who walk through the door.

You have to give them a fabric that will last, rather than something that’s flimsy and destroys easily.

We make sure that we reinforce trousers in parts where they can break, that we strengthen the fabric in certain spots and do double stitching when necessary on the side seams and inside the legs.

We stitch the seat of the trousers by hand so the seams won’t break.

We do all these kinds of things.

My kind of tailoring is a dying trade.

Some people say there might be a return to hand-stitching.

There’s a revival of the art, but tailoring is a trade that takes too many years to learn by hand.

To become a good tailor you need a good eye. You also have to be good with your fingers and with your hands. If they aren’t coordinated there’s no way that you can become a tailor.

Working with different fabrics also requires different skills. Some people want something solid and require double-stitch everything. We also have customers from warmer climates who want their suit to be very light.

In Melbourne about 10 ounces, or 300 grams of fabric, for a suit is perfect.

Melissa’s been here for about four years but, unfortunately for me, she’s about to fly to Milan to try her luck there.

Flavio is almost as old as me and he has never been interested in being a boss. He worked in Rome for 12 years before deciding to move to Australia. Someone told him there was a tailor here, and he’s worked in this shop ever since.

When I took over there were half a dozen workers, but only two have stayed. Alex, who passed away about 10 years ago, and Flavio who’s still here with us. I started in May 1972, and he started in February.

When there’s work to be done, he’s here stitching.

Young people have to change jobs 5-10+ times in their lifetime, but I’ve been doing this since I was young.

One day, when the big boss upstairs decides that I’ll have to stop, I’ll stop. I’ll put my hands in my pocket.

But while I can do it, I’ll keep doing it.

But the years go by so fast.

The older you get, the faster they go.