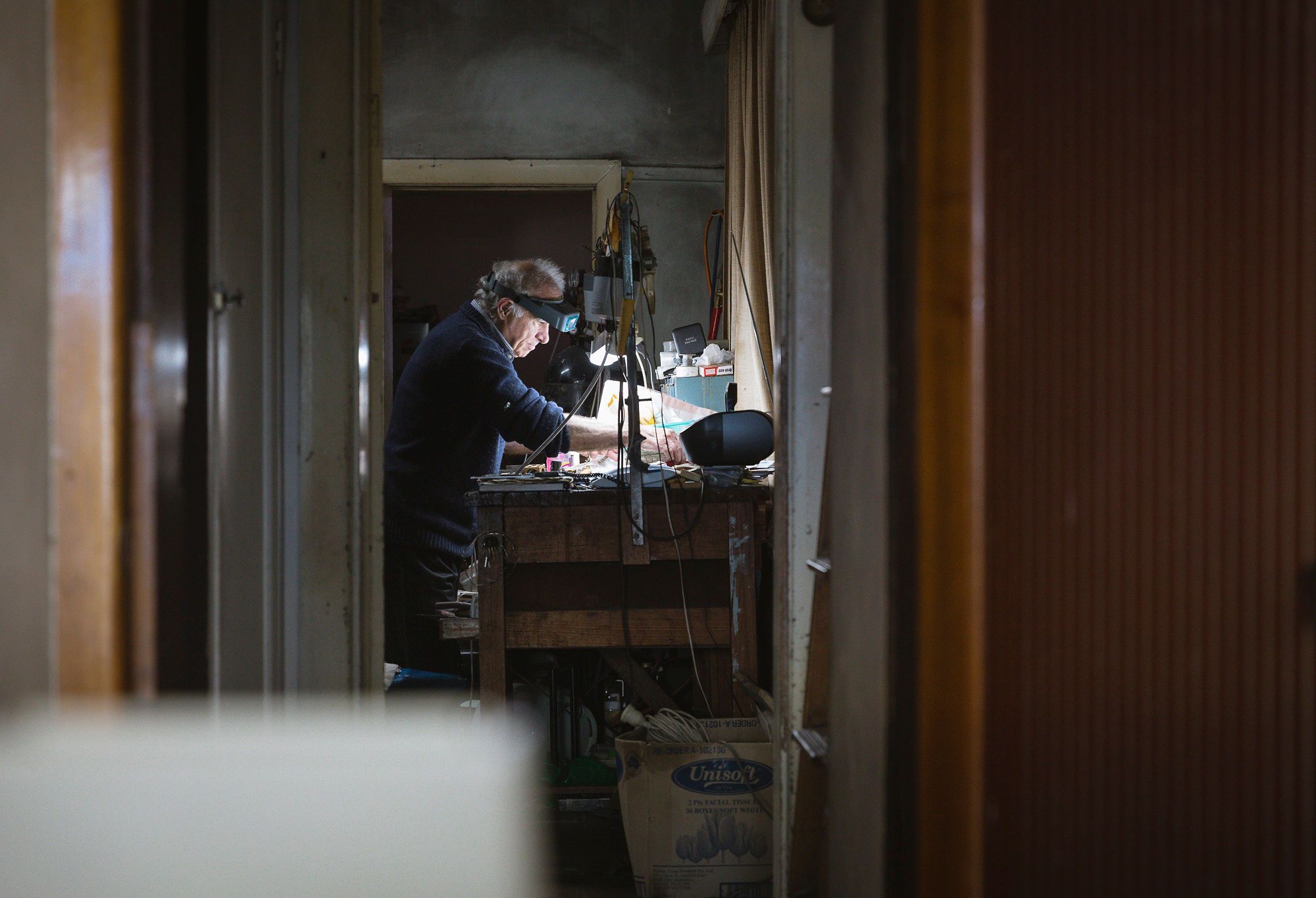 From an interview with Aldo in 2021 that has been edited

Published in collaboration with the Darebin City Council

My father and grandfather on both sides were from a small city in Italy called Cassino, and they worked as jewellers and watchmakers in workrooms prior to World War 2.

The war was very tough. My dad, Joseph, got caught up in the camps in Auschwitz but he was lucky to escape and survive.

He came back to Italy after the war but had no money, so he learned to be a typewriter mechanic.

From a jeweller and watchmaker, to that.

Dad could also repair rusty sewing machines. He’d pull them apart, dismantle them, clean them up and put them back together. He learned to do that from an Italian master during the war. He also made earrings, rings, bracelets and different charms, as well as his own tools by hand.

After the war, he made jewellery while continuing to work as a repairer, but there was no money for food, let alone jewellery.

My dad’s backroom looked like mine, but maybe a little bit smaller.

My father was taught by his parents in the workshop, and he was a jeweller of all types.

He also had a retail shop in the city square which was beautiful. He was a humble and honest man. He didn’t want to charge a lot, and didn’t make a lot of money.

At a young age, my brother and I were given a choice by my dad. He said, “what do you want to be.”

“A jeweller or a watchmaker?”

My brother chose to be a watchmaker, and I liked jewellery.

My father was unique in that he could do both.

He was a genius.

My childhood was spent with my brother in the workshop.

First you watch and fiddle around with things, then you come to action, then you learn your trade.

My brother was a genius like my father. He came to Melbourne before my father, very poor, with only $100 in his pocket. He went through the Bonegilla camps in the 1950s for about three months, then to North Melbourne. He opened a shop in Footscray, which was like a goldmine.

He was one of the first men to import gold from Italy to Australia.

After coming to Melbourne, my father worked as a jeweller with my brother before opening his own shop in North Melbourne.

I was going to join my father because it was a good trade.

I did an apprenticeship with my dad, then I was lucky to work with the 12 best jewellers in Australia. My father had friends in the city, and he said, “take my son, and teach him what you know.” The workshop was on the first floor of a building on the corner of Elizabeth and Lt Collins St. I would run around, help them clean up and work as well. I did whatever I had to do so I could learn.

At 19 years old I bought a workshop in the city for $700. I worked there for two years, then for another workshop for two more years. The foreman there was the best handmade jeweller I’d seen in my life. He knew how to do everything: a ring, a master pattern, a finish top. I tell you, I’d never seen a jeweller like that, even today. He was a master.

In 1970, I moved to Preston and worked for a watchmaker. He was making a fortune buying things on special and selling at a mark-up, and I made rings for him in the city.  He was on the verge of retirement, and said, “do you want to buy my shop?”  He sold the business and the building to me for $30,000.

I moved all the machines here – some that I inherited from my father – and I started to work.

When a customer comes in for repairs, I fix, replace and polish.

I also repair watches, but I don’t do the full service because you need special skills and training.

Repairs bring the customers in. They trust you for a $10 repair and, because you’ve done a good job, they come back. They’ll say, “I’ve been everywhere, and I can’t find anyone else to help me.” A good repairer is a good jeweller. People may come here with wrecked or broken jewellery. Sometimes no one wants to touch it. I stay in the workshop for a few minutes, work out what I have to do, clean it up and give it back to them.

While they’re waiting, they’ll have a look at the jewellery on the shelf and – if you do a good job repairing – they’ll trust you with high-quality jewellery.

I make everything, from A-Z.

Bracelets, necklaces – a little bit of everything – but diamond rings are my number one priority.

I’ve also served three generations; the old people, the kids and now the grandkids. It’s such a beautiful feeling that they trust you already. They’ll say, “my nonna would come here,” and half the deal is done because you looked after their family.

We have another shop in Gladstone Park Tullamarine, which we started many years ago, and is run by my son. He worked here as a young boy, learned the trade and also works as an accountant. People still come to me and say, “I remember your dad in North Melbourne, he was such a good man.”

My son didn’t have a chance to meet him, but he hears that.

If you came here in the 1970s, the shop would look similar to how it looks now.

I’ve put in new windows, floors and given it a paint job but I haven’t done the full renovation.

I’d rather spend money on stock to sell.

And the work I’m doing now is similar so what I was doing back in the day.

For over 500-600 years, the jewellery trade hasn’t changed but the production is faster and the fashion is different.

What we sold 50 years ago I’d love to have now because it’s come back in style.

It’s beautiful to see someone who has jewellery they bought here many years ago and you remember selling it to them.

When a customer comes in with a watch or a piece of jewellery, and they say it’s important, but they leave it with me, that means a lot. You see stories through jewellery; people getting married or getting divorced. Customers tell you everything if they trust you.

I came from humble beginnings and I brought up a family with four kids while running a business. I also have a lot of hobbies outside of work. I love racing cars, and listening to beautiful music. But the work has kept me active. You’re constantly around young people, you’re on your feet and it renews your passion for life.

I was also lucky to learn from my father and other excellent jewellers who were so talented.

Happiness in the jewellery trade is linked with money and getting good value.

But beyond the money, I love the work. I love when I see people with a chain or a ring on their finger, and they’re smiling. It makes my heart happy. When they buy something, they’ll be content for a long time, and I can tell they won’t come back to complain.

To be a good jeweller, you need that passion. Like an artist or a painter. Like Michelangelo Caravaggio. He wasn’t rich, and died walking on the beach near Napoli, but now his paintings are worth millions.

People appreciate what you’ve made, even after many years.

I’m not learning anymore but I’m watching what other people are doing.

When I went to school, I had a hole in my pocket and in my shoes which made my feet wet. There wasn’t money to buy a pushbike. There was nothing at all.

That’s part of why I appreciate what I do.

What we do is art.

I always wanted to do this and, after 52 years, I still love it.

Written by Aron Lewin, with all photos by Tatiana C.C. Scott