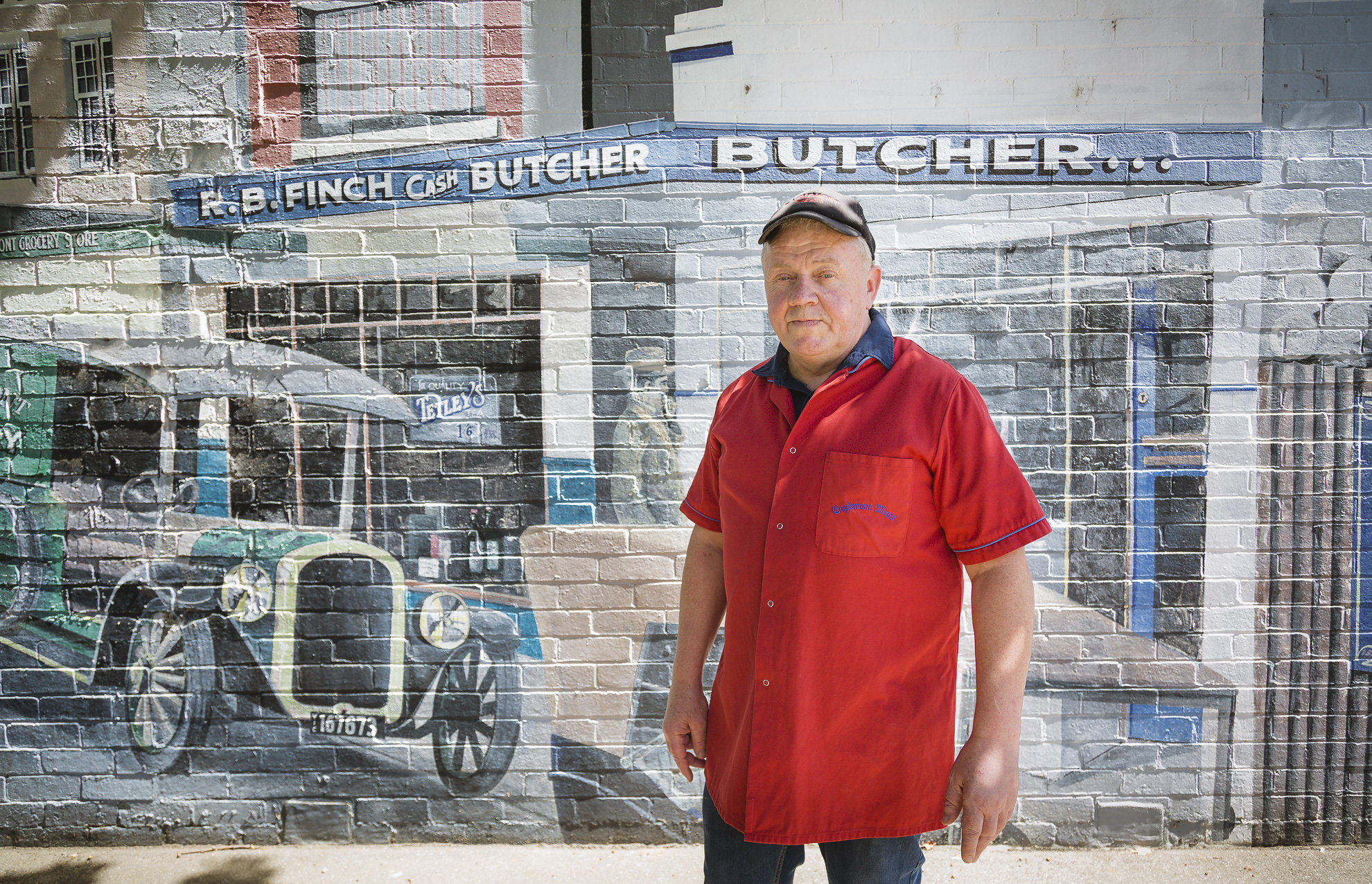 From an interview with Glenn that’s been edited.

This was a dress shop sixty-two years ago.

It closed down, the previous owner fitted it out as a butcher shop and started Eaglemont Meats from scratch.

That was Bill Houghton, who was here for 30 years. When he was there, the butcher-shop had a hand mincer, a hand slicer, no display cabinets and it was all very old fashioned. He retired and put the shop up for sale.

I was a butcher in Preston and I managed a few shops for different guys. After a while I decided to have a go on my own. I heard that this shop was up for sale, Bill and I had a chat, came to a figure and I bought it on a handshake.

You couldn’t do that now.

I did it a bit differently to him.

There used to be a counter at the front with no meat displayed.

Everything was kept in the chamber, customers would come in, ask for what they wanted and he’d cut it up. When I came in, I decided to bring in a few cabinets and display the meat on trays.

Bill is now 86, he doesn’t look any older and he’s a lovely bloke. Fifteen years down the track, he wanted to sell the building. He asked if I wanted to buy it, and I said yes.

We worked out a price with respective real estate agents, shook hands and that was it. No solicitors, no nothing.

Joe was the last butcher in Ivanhoe.

At one stage there were six butchers working for us but now there’s three: Joe, Wayne and myself. Times change, but that’s just the way it is.

Most of our customers are regulars: 80 per cent are from the area and a lot of them are friends who will come in for a chat. They get into us about the football, and different things going on.

We also do a sausage sizzle every Saturday morning for Beyond Blue. Last year we raised $7500 just through that.

We have really good clientele.

Come Christmas time, we do all of our hams on the bone,

We also do a lot of other things: smoked turkey, smoked chicken and so forth.

With ham and bacon most butchers buy it in, but we have an oven that also works as a smoker. We get the carcass, break it down and put it in brine for 24 hours. Then we bring it out, and it takes about 12 hours to cook. All the pork comes from just outside of Echuca, and it’s all free range.

We had just over 400 orders over that period last year, and about 220 hams. For a little shop, it’s choc-a-bloc. We can’t put anything in the cabinets because we put all of our orders in there.

You’ve never seen anything like it. The morning before Christmas we had 280 orders. The queue went in the shop, out the door, down to the fish and chip shop, around and back to the seats out the front.

There would have been 10-15 people waiting out the door to get in.

I became a butcher because of my older brother.

He was a butcher, and he got me a job at 14 as a clean up boy. That was it, I was off and running. It’s the only thing I’ve ever done.

Both my brothers – younger and older – are butchers. My sister was also a cashier at a butcher shop, but she went into the dental trade. Would you believe it, my dad worked for the government, and was one of the first there to work with computers. A bit different, isn’t it.

We went to a Catholic school, so we just wanted to get out.

I have three sons, and there’s no way they’re going to be butchers. It’s the same story with Joe. When the kids came to help out, we never showed them how to cut anything up.

They can do the cleaning and the sausage sizzle out the front, but there’s no way they are going to be butchers.

The industry is more pre-prepared now.

There’s more marinades and stir-fry’s, easy meals to do.

But the biggest killer has been the supermarket, as they’re open 24/7 and you can always get something. So many butchers have closed down, but it’s not just us. There’s very few delicatessens, very few fruit shops.

But we find if people want something special, they come back to the butcher. If they have friends or family coming over, they can ask, “what roasts or steaks are good at the moment?”

You can’t do that at a supermarket.

That’s why they all come back at Christmas.

We’re chefs in a way.

We can’t compete with the supermarkets on price but we can compete on quality.

If a butcher is still going their stuff has to be crash hot so, if the product is no good, we’ll send it back.

We have to have a really good look at it because we rely on it. All of our beef – which is grass-fed and comes from Gippsland – has aged for about three weeks before we cut into it.

Beef is like a good wine: you have to mature it for a few weeks for it to be any good.

If you eat it too quick, it won’t be that nice.

When I was growing up, a lot of Australians would have a lamb or beef roast on Sundays.

And when I started butchering we sold a lot of big roasts but, as the family unit has gotten smaller, we don’t sell as many big cuts.

It comes down to time. Both parents are working, picking the kids up from school and – when they get home – they don’t want to spend time cooking a meal. It’s no longer 9-5.

But a lot of the slow cuts: lamb shanks, necks and pork belly have come back in vogue. Over the last five years, everyone bought a slow-cooker. It’s requires a cheaper cut of meat but it is made softer – and is full of flavour – when done right.

Attitudes to meat have also changed over the years. A lot of people will come in and they’ll have a vegetarian in the family.

So we buy and sell veggie burgers, things like that.

I think it’s a dying trade.

I went to the Queen Victoria Market the other day and – when I spoke to a few of the butchers – they told me there was one apprentice there. One. In an area like that, there would have been 15 a little while ago.

It’s hard work, and not everyone is prepared to work the 60-80 hour weeks, but it is something I’ve done throughout my life. And, at about 3:30 or 4pm, we can go out the back and have a beer.

There’s a real bond between us. Joe and Wayne have both retired, but they come in 2-3 days a week because they love the barter and the shit-hanging on each-other. Not many people come across a sad butcher. They’re often laughing and they have a smile on their face.

People also love going into an old butcher shop. The smell in the air and all of that. Customers will come past early in the morning and say g-day, and some of the presents we get during Christmas are incredible. There’s a lot of shit going on in the world, so people can come in for a laugh.

It’s a beautiful area, and I’ve been very lucky, so I’ll keep going for as long as I can.

Written by Aron Lewin, with all photos by Tatiana C C Scott